Igneous rocks are crystalline rocks that are derived from a molten silicate melt deep within the Earth. They may be extruded onto the Earth’s surface through volcanic activity as lavas or pyroclastic (fragmented volcanic) material; or be intruded into crustal rocks from beneath as large granitic batholiths or smaller dykes or sills. Igneous rocks are classified according to texture and crystal size, which is related to cooling rate, and to the mineral content. They can be classified according to silica content – from felsic (silica-rich) to mafic (silica-poor).

Igneous rocks in Ireland range from plutonic (intrusive) granite found in the batholiths of Leinster, Galway, Donegal and the Mourne Mountains, to the volcanic tuffs and lavas of Waterford, Galway, Limerick, Kerry, and Antrim. These rocks are primarily the result of the closure of the Iapetus ocean in the Ordovician and Silurian, and the opening of the Atlantic Ocean in the Paleogene.

Volcanic rocks come in many colors and textures, depending on the setting of the eruption and the resulting viscosity and chemical composition of the lava. The three specimens below, all from Ireland, represent a mafic, intermediate and felsic rock respectively.  Mafic volcanic rocks, such as basalt, are formed from less viscous lavas and tend to be darker in color, whereas felsic rocks are from more viscous lavas, which tend to be more explosive, and are lighter in color.

The other volcanic specimens below from around the world showcase the range of textures seen in volcanic rocks – from light porous pumice to glassy obsidian. The darker lavas are more mafic, and the light pumice is felsic. The obsidian is somewhat deceptive – it is a more felsic (silica-rich) despite the dark black color, which is due to impurities.

Intrusive volcanic rocks are formed in a variety of environments from blob-shaped plutons or batholiths, which can be on a scale of hundreds of kilometers, to smaller scale dikes or sills, which cut across country rock. The three pictures below represent a mafic, intermediate and felsic intrusive rock respectively. 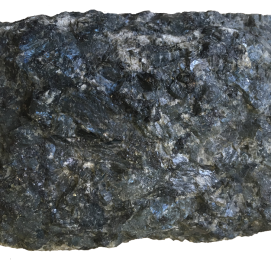 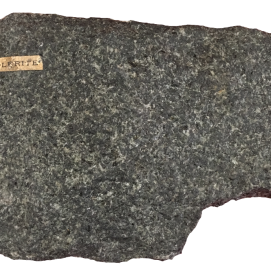 The texture is related to the rate of cooling of the molten rock: if it is slow the crystals will grow to large sizes; if it is fast then the crystals will be small. Each of the three rocks below have broadly the same composition and mineralogy: quartz, mica and feldspar.

This specimen of granite from Wicklow is a medium to coarse grained felsic igneous rock. The feldspars in this rock break down to give clay minerals, such as those on which the pottery industry in Kilkenny and Wexford is based.

Granite pegmatite is composed of very large crystals of quartz and feldspar with some biotite mica. In occurs in small intrusions in granite masses, such as sills and dykes. This specimen was collected in Co. Dublin.

Ailsa Craig granite is a microgranite composed of tiny almost microscopic crystals. It contains the distinctive blue mineral Riebeckite. It is commonly found on beaches on the east coast of Ireland – it was carried from Scotland by glaciers, during the last Ice Age.